#Fun4thedisabled interviews Christian Bagg, creator of the Bowhead Reach, a mountain bike for wheelchair users. He discusses his personal journey, and how the Bowhead Reach has allowed him to live his life without restricting his freedom to explore the world the way he loves.

[Transcript with visual descriptions: Uplifting music plays throughout the video. On-screen text reads: For more information and a full transcript of this video, check out Fun4thedisabled.com. Christian Bragg is heard telling his story as various pictures and clips are shown.] 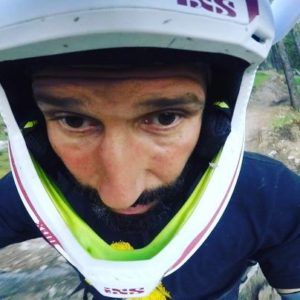 Christian Bagg [Voice over]: I was 20 when I broke my back. And I was snowboarding and it was immediate and I knew it.

[Text on screen: In 1996, Christian Bragg was paralyzed in a snowboarding accident that would completely change the course of his life.]

Christian [Voice over]: But I was young and I was fit and I loved the mountains and I loved being outdoors. And I happened to be a machinist.

[Text on screen: Over the course of 20 years, Christian used his engineering skills to develop the Bowhead Reach (TM). A motorized adventure bike for wheelchair users built to handle the outdoors.]

Christian [voice-over]: Being paralyzed, you’re – I believe this – that you’re 100% reliant on technology. So, items were the things that were going to allow me to get back to these places that I loved. So, you know, the first attempt to get outside were just putting knobby mountain bike tires on a wheelchair and that would get me out of the parking lot. And you know 100 yards in and then the front wheels would dig in so then I made a thing to make the front end bigger and that would get me a little further. Every foot further I could go was something new. It was really just incrementally solving the problems while having fun the whole time. 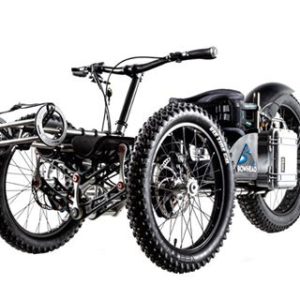 [Text on screen: In the early stages of development of the bike, while working at Alberta Parks, Christian was contacted by the nearby Easter Seals Camp Horizon, a camp for disabled children. A girl there, Lindsay, was frustrated by her inability to join her able-bodied friends in their annual fundraising mountain hike. Her camp counselors asked if Lindsay could borrow Christian’s bike.]

Christian [voice-over]: It was a prototype in the truest sense. We hooked up a rope to the front and a little push handle in the back, so they could push. But a big difference for Lindsay was she steered this and that’s not insignificant, because Lindsay would often have been pushed around and taken to places that someone thought she wanted to go. I was stuck at the bottom of the mountain because she was in the very bike – she was in the only one that existed. And she came back about four hours later and she said to her mom, “Mom, that was the best day of my life!” And that’s when the penny really dropped for me and I was like, I can’t just make this for myself. Like, I have to make this for, for everyone. 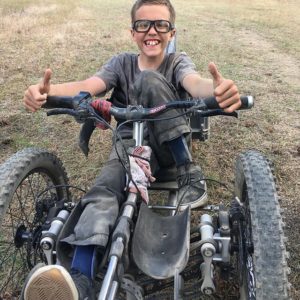 [Text on screen: It has taken Christian 20 years and nearly 25 different versions of the bike to get to where it is today.]

Christian [voice-over]: I had a full-time job doing other things so the development was slow, it was a slow-paced development. And then when my wife was pregnant, I thought, like, I’m gonna have a child that if we go out to a park, I don’t want to say you can’t go there, Dad can’t go there. Or, you know, when we’re with Dad we stay on the trail. I wanted to be able to go, to follow them. And it broke my heart to think that I would be a limiting factor to that. So that’s really when the reach got pushed, development wise so that I could rely on this thing to go where he would want to go. And now I’ve got a little daughter, to go where she wants to go. And them not think, well this isn’t somewhere for Dad. Everywhere is for Dad.

[Text on screen: Comprised of parts that are machined, 3D printed, and sources from other sports, such as wind surfing, each Bowhead Reach is custom ordered and hand assembled.]

Christian [voice-over]: And I spent years and years racing a wheelchair, like in a racing chair, doing marathons and you’re in a position where you’re leaned over and you’re sort of staring at the ground. When I’ve traveled all around the world racing, I saw the same yellow lines in Japan as I saw in Boston as I saw in Alaska or in Australia. Because you’re staring at these yellow lines on the road and I thought, do I want my outdoor experience to be staring at the ground and I didn’t. I wanted to stare at the trees, and the mountains, and the rivers, and the sun. The other way that I experienced those things were with friends and family. And it was difficult to talk to them because I’d always be trying to look up at them and it wasn’t as easy to have these, sort of, interactions with them. So, in the Bowhead Reach position, you’re able to sit and talk and stare at the sun and stare at the creeks and stare at the trees. And have that experience while still, frankly, you’re on the most capable bike for the adaptive crowd as you could possibly be. Nothing touches this.

[Text on screen: Bowhead seeks a variety of financing sources for their bikes including crowdfunding and corporate sponsorship. Bowhead also helps with matching a company looking to donate a Bowhead Reach with an individual or organization in need.]

Christian [voice-over]: What truly makes the Reach unique, and that nothing else has, is the, that articulation up front. And that’s what makes this work. That’s what makes it to be able to cruise down a mountain trail on corners doing 30 MPH. But it’s also what makes it safe on a city street for someone with Cerebral Palsy or who’s older or just wants a safe way to get around. It allows them to have one wheel up on a curb and one wheel down, and not tip over. Because the Bowhead is amazing on sand, it’s amazing on city bike paths, it’s amazing at dog parks. I use it every morning, during the school year. I’ve got a bike trailer for mine and my son, and the two neighbor boys, all three of them hop on the trailer, with their bike helmets on, and I drive them to school. The very thing that makes it extreme and capable is what makes it safe. 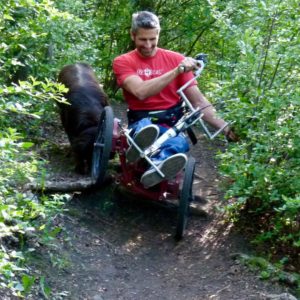 [Text on screen: For more information on how to purchase or sponsor the purchase of a Bowhead Reach, go to www.bowheadcorp.com.]

Christian [voice-over]: The person on the bike behind us, they’re in like an aggressive biking position because we’re mountain biking. We’re flying through the woods and he’s on the front, hanging on the handlebars and he’s steering and we’re having a very, we’re having a very able-bodied experience. There’s nothing disabled about that picture or the way that we spend time in nature together.

[Video ends with credit roll. Transcribed and captioned by aslcaptions.com.]