Interspersed throughout this blog post are 12 images of each section of Sam Kirk’s mural. Don’t forget to keep scrolling! Each image is also embedded with detailed alternative text.

This fall, Fun4theDisabled had the pleasure of documenting the progress and unveiling of a beautiful new mural titled We Are Proud on the brick walls of the field office for Chicago’s Mayor’s Office for People with Disabilities (MOPD). 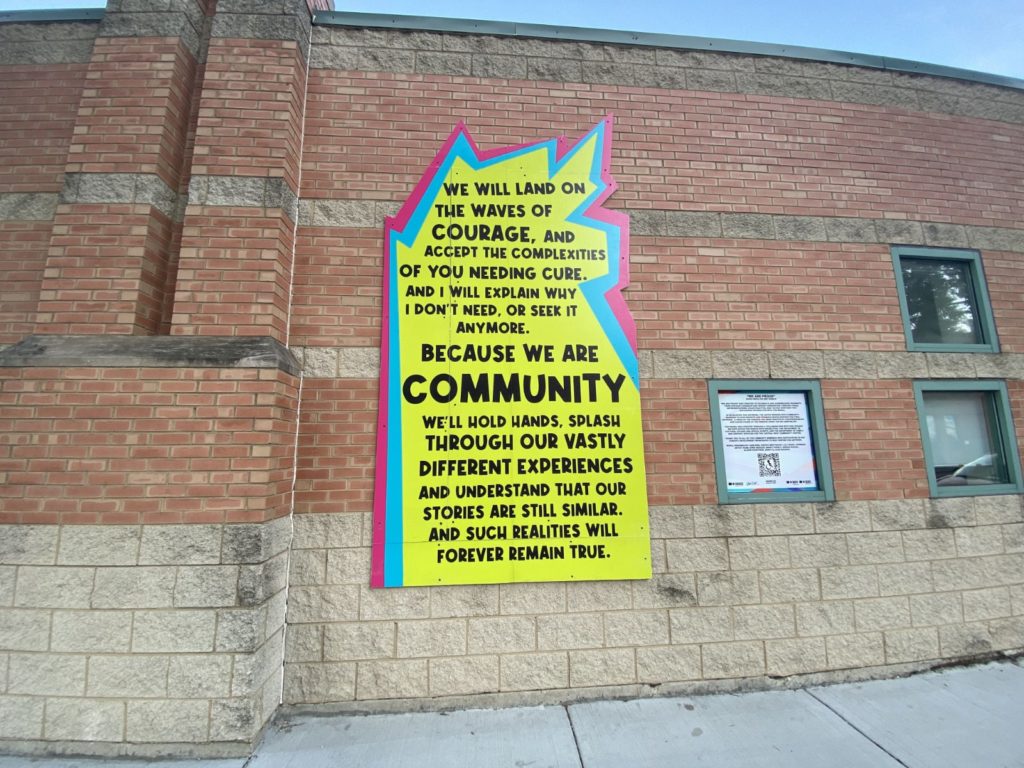 The first section of the mural with an inspirational introductory message.

The mural was created by Chicago’s own Sam Kirk, an interdisciplinary artist whose own intersectionality as a biracial, queer woman informs her approach to her work. She often explores culture and identity politics in her art and frequently celebrates communities who have historically been unrepresented or excluded, including the disability community. With 15 years of experience as a public artist and around 60 murals under her belt, Kirk was a clear choice for the commission of the mural.

Because of the structure of the building, We Are Proud was put together in a rather unconventional way; instead of painting directly on the side of the building, Kirk and her team painted the design at her studio on medium-density fiber (MDF) panels that were then installed to the walls of the MOPD. This process actually takes more preparation than that of painting directly on an exterior wall, but it also allows for more flexibility and increased longevity of the work as the panels are easier to touch up and can be moved if needed. 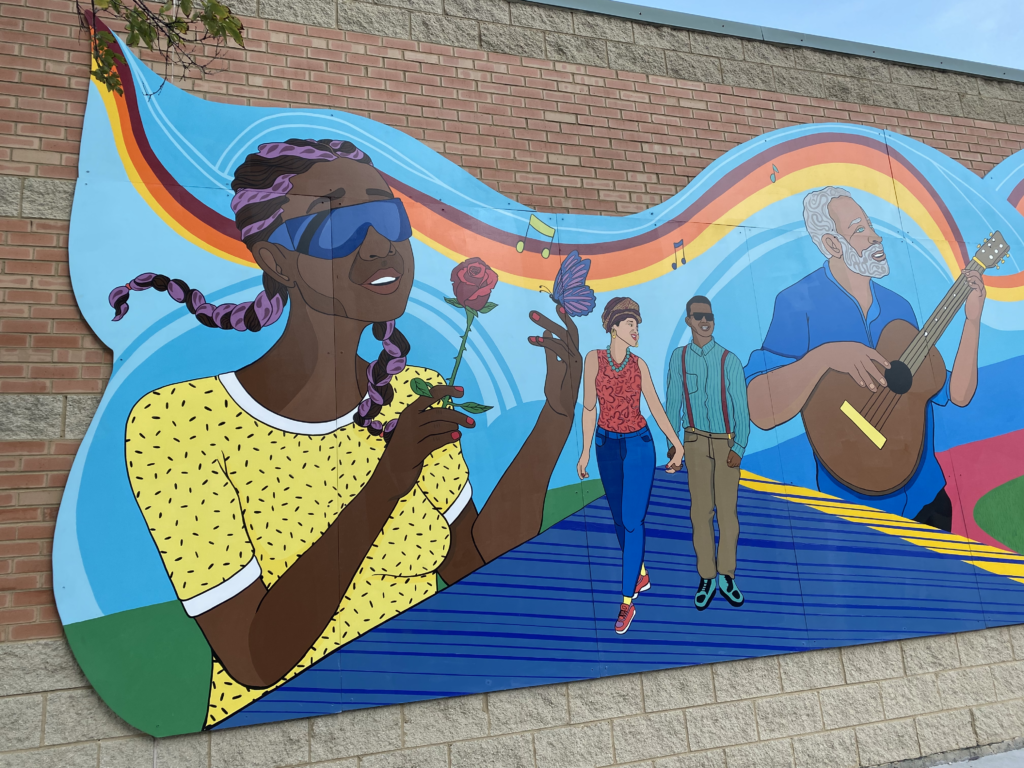 A look at the first half of the mural’s first section, with our characters enjoying the outdoors. 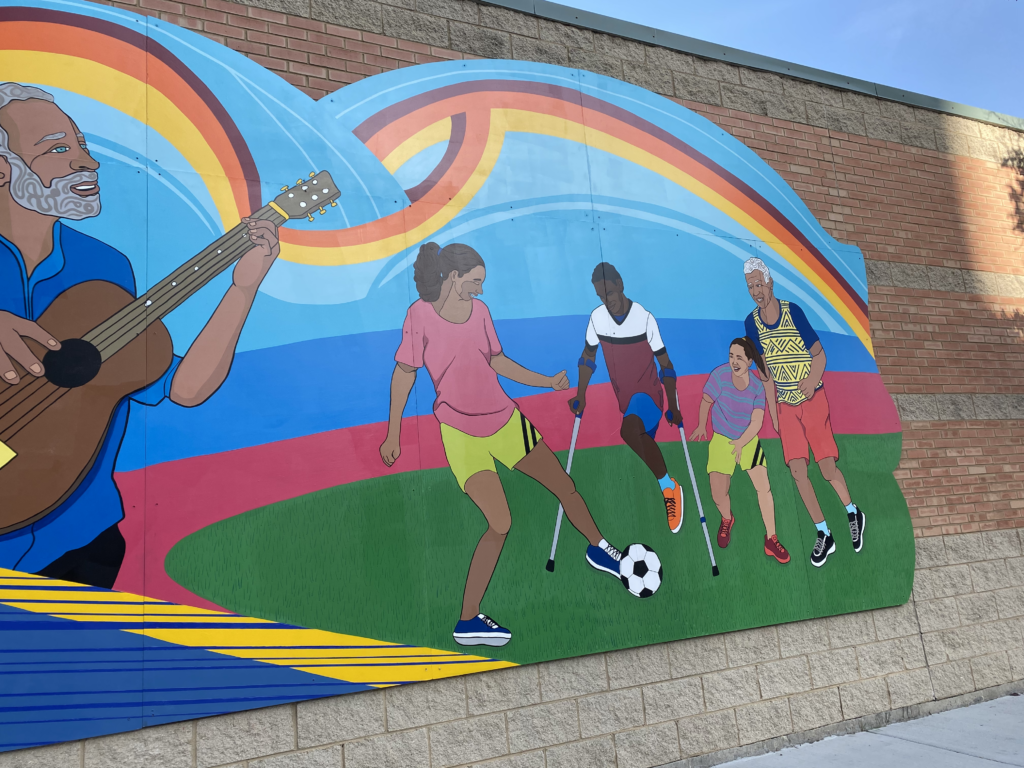 A closer look at the second half of the mural’s first section, featuring some friends playing soccer.

When approaching the concept development process, Kirk and the MOPD held community meetings online to hear from Chicago’s disability and senior communities to hear what it means to be a person with a disability living in Chicago. In these meetings, guests discussed what they wanted to see more of when it comes to disability representations, as disabilities cover a vast scope, but representations often remain one note. Kirk considered many questions and listened to community voices for guidance: How would she depict invisible disabilities? How will the mural itself be accessible? How can the most amount of people possible engage with a two-dimensional mural? 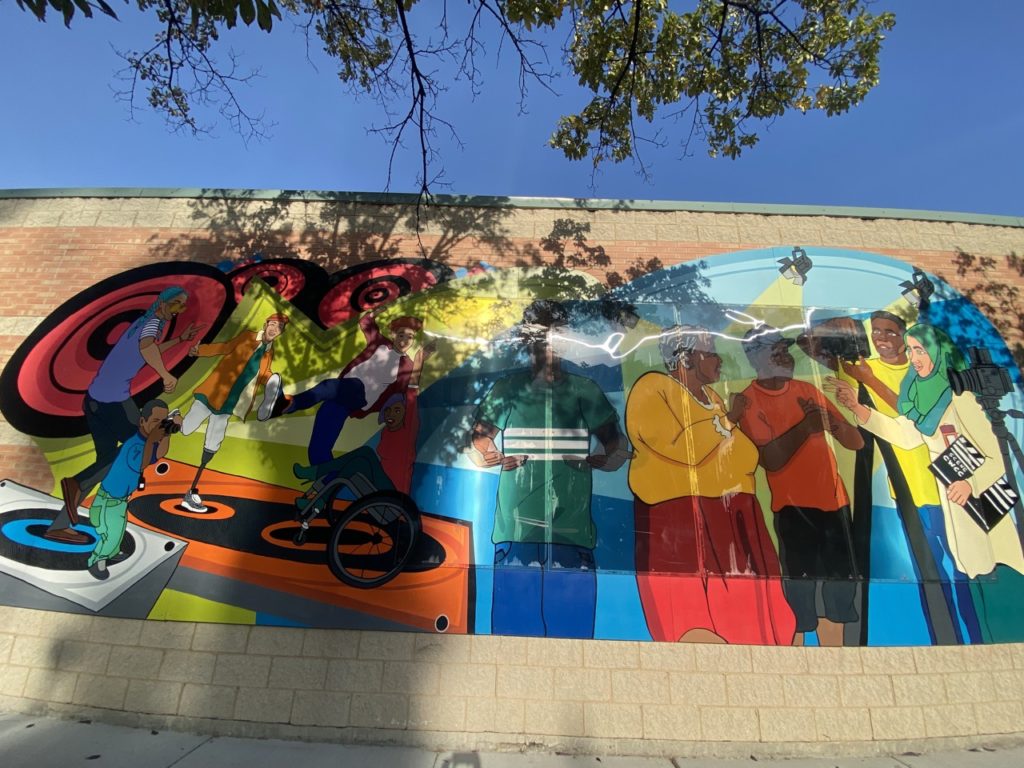 The full second stretch of the mural, including scenes of individuals engaging in artistic expression. 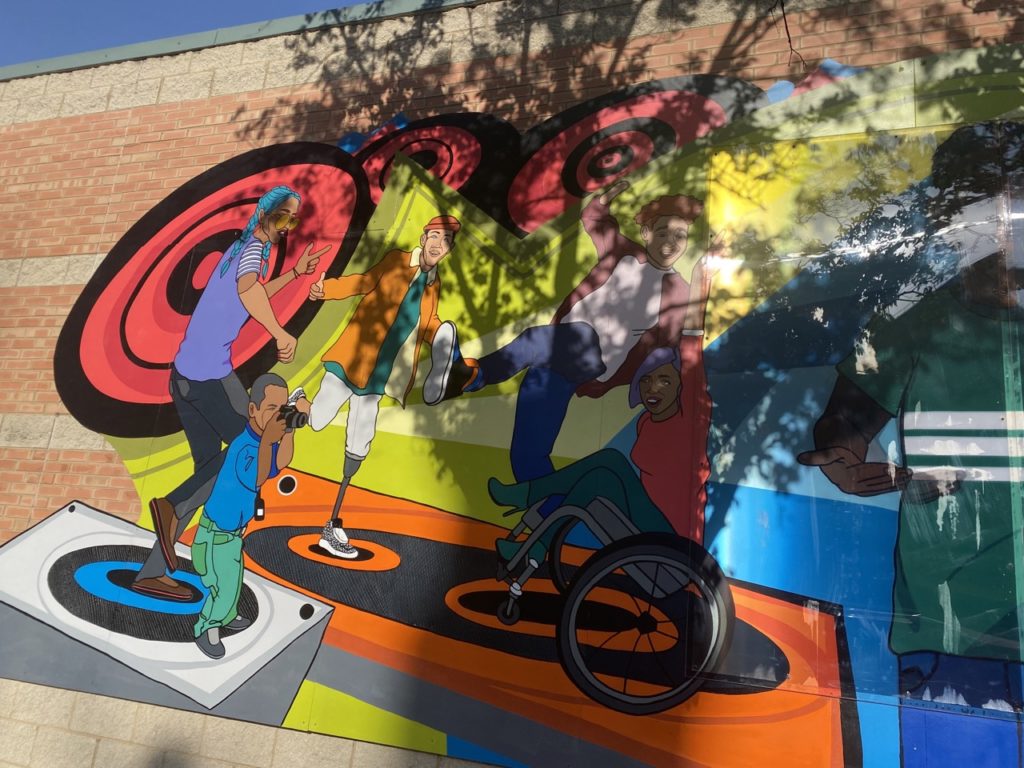 A closer look at the first scene in the mural’s second section- friends dancing and photographing one another. 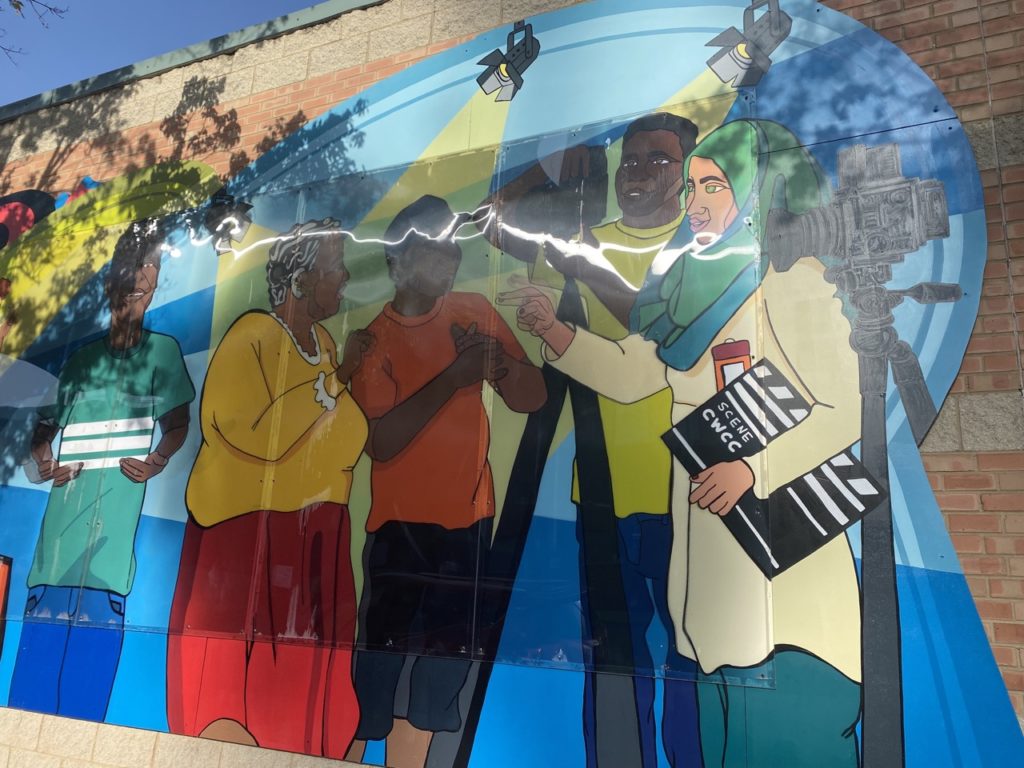 A closer look at two more scenes in the mural’s second section- a young man holding some books, and some colleagues on a film set.

We Are Proud consists of several bright, colorful, and diverse sets of panels depicting different scenes along the stretch of the building lining Ogden Avenue. It was unveiled in October 2022 at 2102 W. Ogden Avenue, is accessible to those with low vision or colorblindness, and features individuals with varying disabilities, cultural backgrounds, occupations, identities, and passions, as well as high-contrast text. 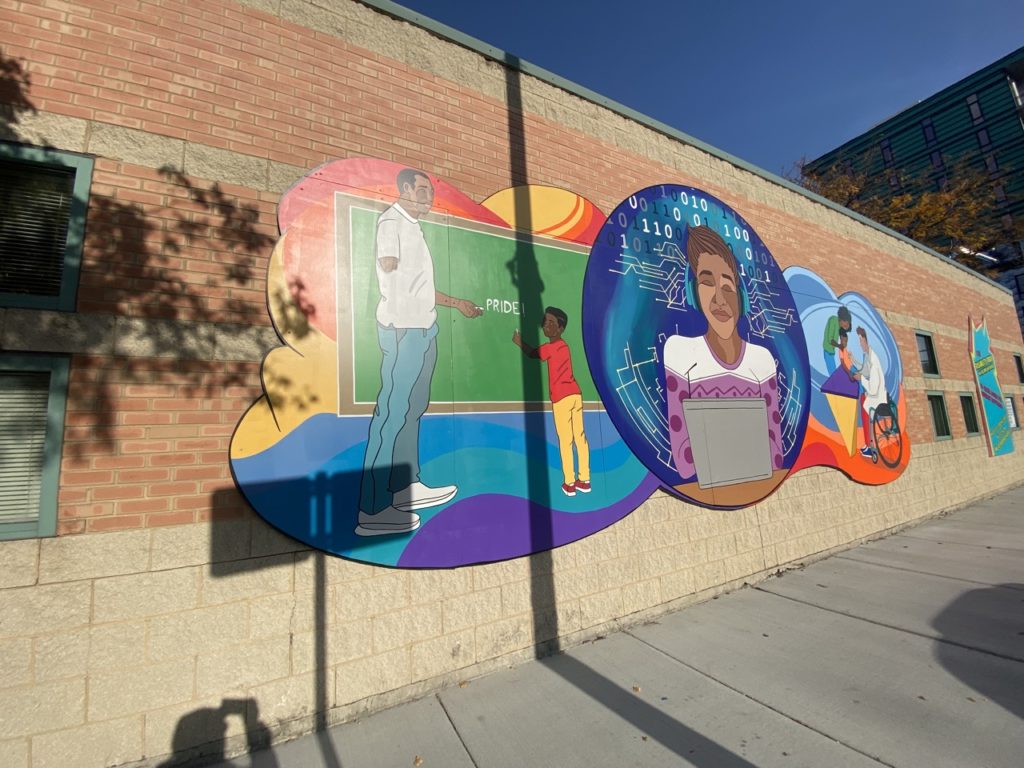 A full look at the mural’s entire third section. 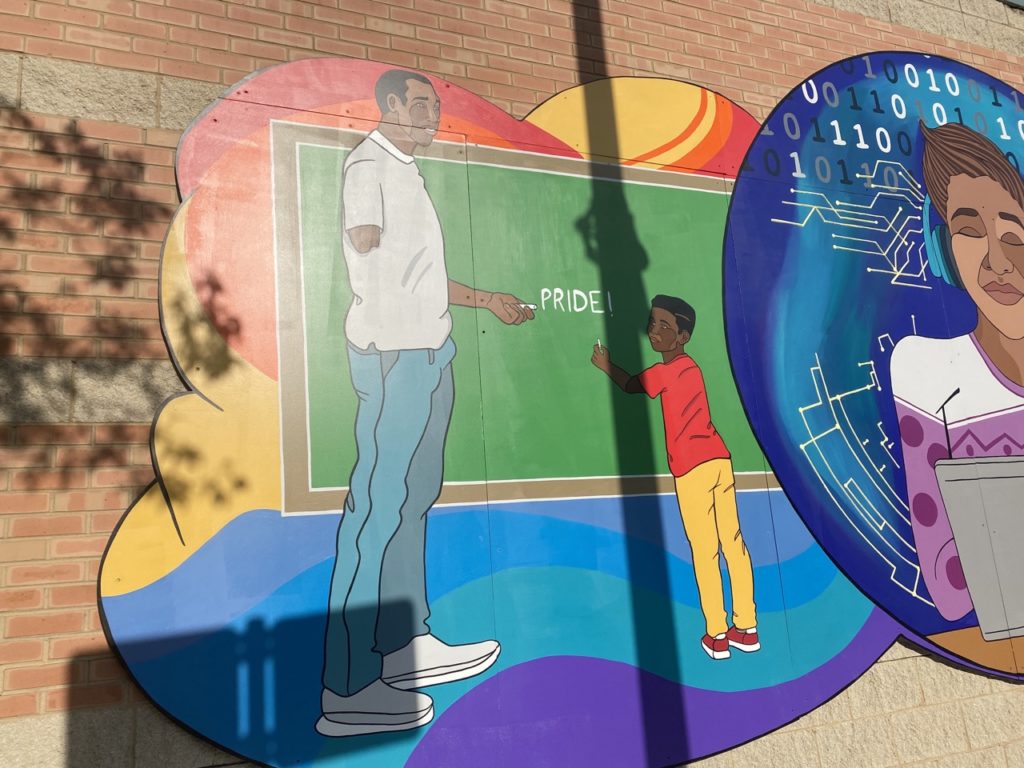 A closer look at the first scene in the mural’s third section- a man and a child displaying their disability pride on a chalkboard.

A closer look at the middle scene in the mural’s third section, featuring an individual coding. 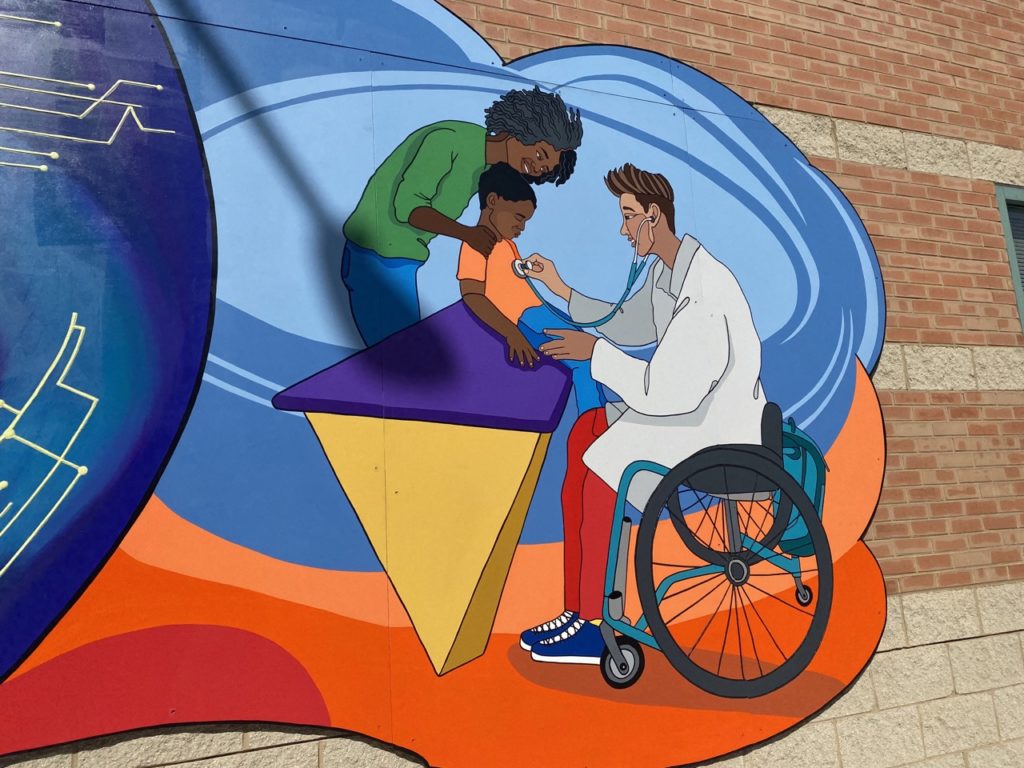 The third scene in the mural’s third section- an inclusive and diverse doctor’s appointment. 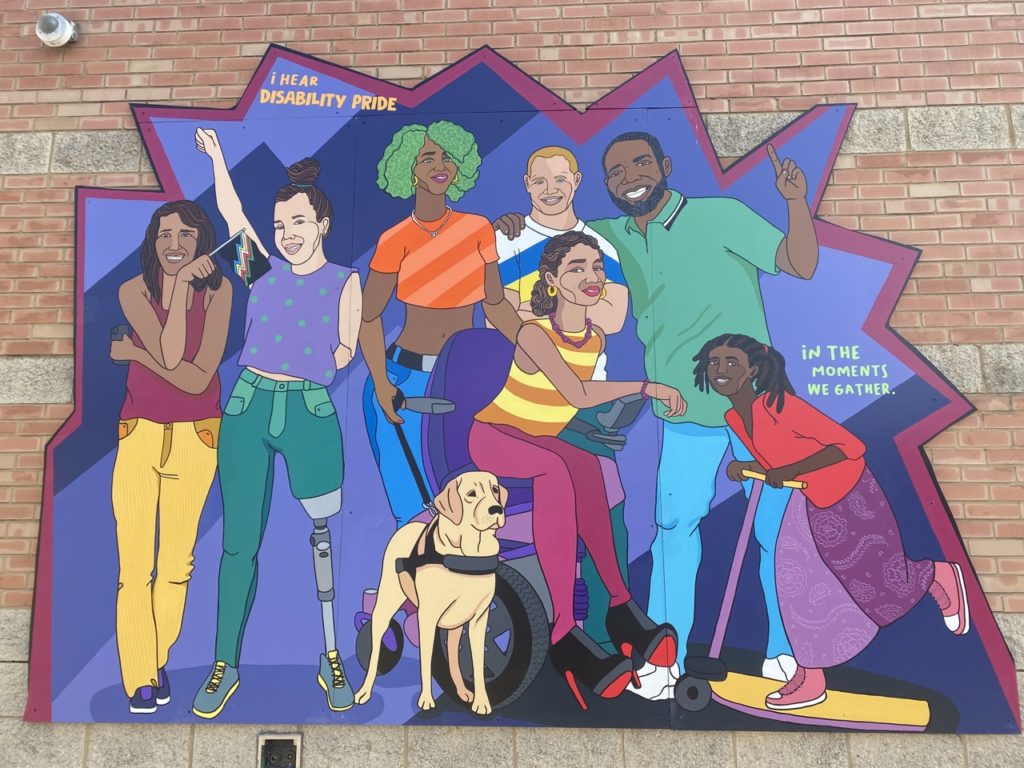 Another section of the mural along another part of the MOPD’s walls, celebrating disability pride.

Next to the first panel of the mural is a placard describing the piece and its conception, and it includes a QR code which takes anyone who scans it to Fun4theDisabled’s documentation of Kirk’s process as the artist. You can also find the video by following the link here. 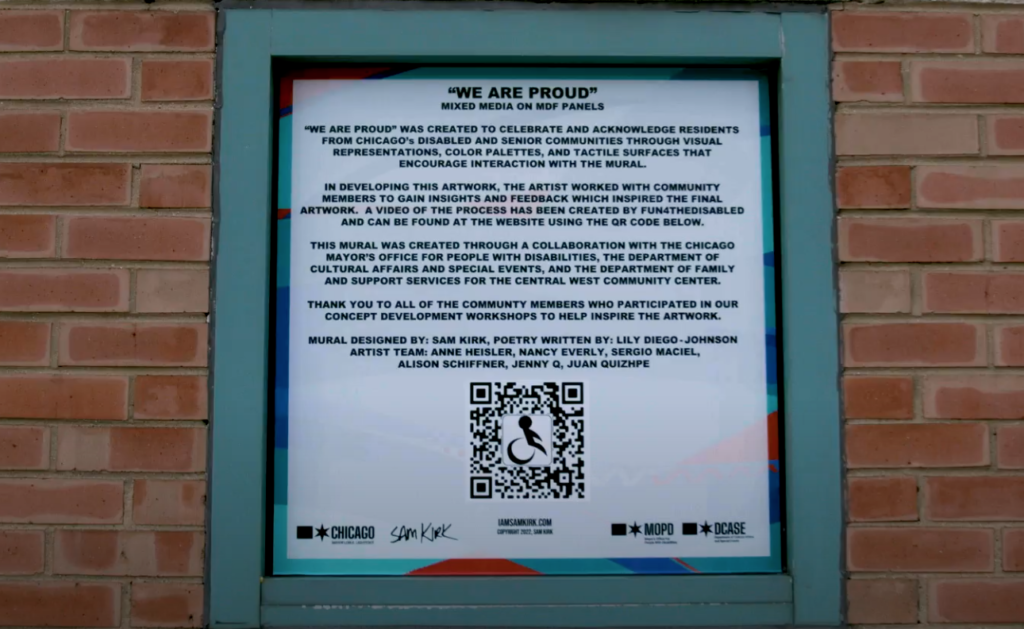 The placard and QR code located at either end of the mural.