The Prominent Occupation of the Sightless in China

CHONGQING, CHINA In the past twenty years of my life, I have never walked into a blind massage parlor – people from countries like the United States probably have never heard of it. A massage given by blind therapists is an actual thing in China, and a few other Asian countries including Singapore. In fact, massage therapist is not just AN occupation, but rather THE most prominent occupation taken by the blind community in China. Driven by the will to know about the therapists besides browsing information and statistics from the internet, I went out to talk to them.

I often see this masseur come out of his place, standing by the door and chatting with his friends from the nearby groceries, barbershop, and house agency. Sometimes he lights up a cigarette and listens to his phone. The place he runs is called “Caihong Blind Massage”; Caihong means rainbow in Chinese.

So I walked to the masseur and asked him if the place was open. He answered “yes”. Most massage places on the streets of China look quite similar to private community clinics except for the heavy curtains behind the sliding doors, and therapists even wear the same white gown as doctors do. I followed the masseurs and slid the door back.

There was a dark-brown cost table made of wood hanging on the wall. General massages are charged at 75 RMB an hour (11-12 USD), foot massages are 100 RMB (15 USD) an hour, and medical massages are 120 RMB (23 USD) an hour. The rate is slightly lower than the average of the massages conducted by non-blind therapists (110-120 RMB) but not by much. Since Caihong Blind Massage is located in a suburb of Beijing, the cost might be higher in central districts. “May I have my neck and back massaged?” I asked. “Sure, please lie down,” he answered. 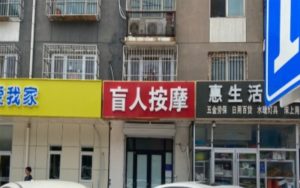 While the masseur was getting prepared, I told him that I am writing something about his career. “Really?” he sounded delighted, “for a school project?” “Not really, more like a public blog. And it’s in English.” He got intrigued and asked me about it; he also told me that his name is Liu Changle. Liu has been a massage therapist since he was 16 years old – back then he helped his parents at their place. Family-owned massage places are the most common, Liu told me. They are started when a blind masseur marries a blind masseuse, they open up a place, and their kids help out. Same things for all family-run businesses.

“Then you must have learned a lot from your parents,” I said.

“You can say that, I also took massage training sessions at schools,” Liu responded.

Children born sightless and those who become visually impaired in youth would go to schools for the blind or special education schools (where education for the whole disabled community is offered). The majority of the schools are run by governments or social organizations, and only around twenty percent are private. schools offering education for the disabled must be registered with the China Disabled Persons’ Federation (CDPF), the national organization for all individuals with disabilities.

“Are there any other options?” I asked.

“Yeah, you can go to a blind massage school. It wasn’t that much of a thing when my parents were young, but more are opened every year. If I weren’t born in a therapist’s family, I could have ended up in one,” Liu explained.

Besides being dedicated to massage training, specialized massage schools play the same role as higher education. Sightless children must acquire elementary education first in special education schools first, and whether they pursue higher education depends on their families. In many cases, specialized massage schools are the only places to get a medical massage therapist certificate. “Do you have one?” I interrupted Liu. “No. And if I did, I could totally run a medical massage place and charge 200 RMB an hour. But I’m okay with what I have.” It seemed to me that Liu is rather satisfied with his life.

“What would you do for a living if not giving massages?” I wondered.

“I’m not sure like I thought about it before but I really don’t have many strong points. Maybe a TikTok streamer? The problem is I need someone to shoot for me, but the contents on disabled community go wild occasionally, right?” Liu said.

Liu’s right. People are amazed by how someone can do perfect calligraphy even with no arms. Screen readers have definitely changed their lives in such a digital era. Liu said that he loves to listen to the news on Weibo (Chinese version of Twitter) and fiction, especially electronic literature. The massage continued, and Liu asked if I sit for a long time every day. Indeed, I barely get up except on the way going out and going home. My back and shoulders are too stiff for a twenty-year-old student. It is no news in China that people with injured eyesight use contact feeling more – to be specific, the blind community have more agile hands, and that is a strength for massage therapists. Moreover, there is another reason for the popularity of blind massages. China’s society remains rather conservative and prefers things done in a conventional way. Since any types of massages all involve a certain amount of contact, many feel shy about their bodies being seen and touched by the therapists. In extreme cases, some therapists are accused of being too “intimate” with the customers because of the way they conduct therapies and how they stare at the bodies. For these customers, sightless therapists are a more comfortable answer.

When I came to Beijing, I noticed that more blind massage places are around the neighborhood I lived in than the neighborhood back in my hometown Chongqing. China Industry Information states that blind massage training was initiated and publicized by the government in 1985 to create job opportunities for the community. It was the Beijing and Guangdong governments that first started to widely support the therapists. In some regions, the local government would implement specific policies to regulate the amount of massage places run by non-blind people. Statistics show that by the time of 2010, more than 50 percent of the adults born blind were therapists.

However, Liu said that this led to a brand-new issue. “If we all do massages, people will believe that this is the only profession, the only thing we can do,” Liu paused for a second, “it is the case for me since giving massages is all I can do, but when younger generations start to pursue other careers they encounter difficulties,” he paused again, “People think that they can only be therapists.”

In addition to massage therapists, fortune tellers are another iconic profession in the blind community in China. On the one hand, the practice of fortune-telling can be traced back to Yi Jing, also known as I Ching and Book of Changes, which was written in Han Dynasty (202 BC – 220 AD); on the other hand, a small group of people believes that when one loses the ability to see the world, he or she actually gains the ability to see those supposed to be invisible, such as fortune and the essence of the reality. The dilemma of fortune tellers is the same as therapists’; when more sightless people do similar things, others assume that they are not as capable of doing anything else. Blind people begin to be bonded to massages and fortune-telling, and that is disturbing for those exploring various possibilities.

I also talked to Yang Yongquan, another masseur running a place nearby. He is also an active member of a screen reading app’s recruitment team. Yang claimed that the current circumstance of this industry is a direct result of governmental policies. In Taiwan, Yang said, blind people were originally the only community that could legally run massage places. Even today, non-blind students still cannot study giving massages in universities.

As I did my research, more controversies caught my attention. Kou Aizhe, the founder of a podcast program Story FM, posted that while people go to blind therapists due to shyness, some masseuses get sexually harassed by their customers specifically because the customers can harass them because of their specific vulnerability. Of course, this is not only the case for the therapists, Kou added, but many blind people also get such treatment solely because they are not able to see others approaching.

“Why is your place called Caihong anyway? You know normally a blind massage place would just be called ‘Blind Massage’,” I asked Liu after he finished the therapy. The muscles on my back and shoulders were eventually loosened. “My parents wanted to name me Caihong before I was born, but they figured that it would sound too ironic. I guess it’s not that ironic when you don’t take the disability as something significant. We can all have colorful lives after all.” Liu followed me out of the room. “That was refreshing,” I thanked Liu. “It’s alright, now you have a story to tell,” Liu responded.